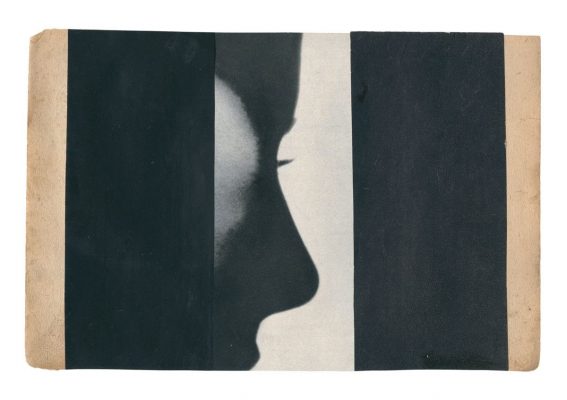 You recognize an image by Katrien De Blauwer. And if I say image it is not because I’m treating it indifferently or nonchalantly, as if I was not aware of the layered manner in which it was created, the sharp way it was cut and the delicate way it was pasted onto a light brownish, gently torn out piece of paper that serves as a mature ground for it to rest on, or the silent yet sturdy support a strip of red, blue or black paper provides. I use the word image, not because I’m not aware of those fragile layers that, once combined, form the altogether sensitive surface. I say an image because that is how it reaches me: as a consistent whole. Despite the ever present cut.

“We make our way through Everything like thread passing through fabric, giving shape to images that we ourselves do not know,” the poet Rainer Maria Rilke wrote. Katrien De Blauwer uses old paper, vintage magazine photographs, glue and scissors to create images that evocate feelings of a certain past, feelings of longing and of loss. To do so she reaches deep into her unconsciousness. Meaning comes later, once the image has been given its final form.

I recognize the work of Katrien De Blauwer as an image, because at first glance it speaks to me as directly as a photograph does. Perhaps this is why the world of photography so quickly embraced her. Yet there is a lot more to her work than photography. De Blauwer studied painting and fashion for a while but never finished it. Still she considers the different paper stocks and the carefully selected color strips as a painter’s canvas and pallet. And it is mostly from fashion inspired magazines, dating back to an era where people seemed to have a better sense of style, that she elegantly draws her slow burning moods.

The cut then refers to the world of cinema. And to editing, or montage. The technique of which Russian film director Sergei Eisenstein said that it “calls to life and forces into light that general quality in which each detail has participated and which bins together all the details into a whole, namely, into that generalized image, wherein the creator, followed by the spectator, experiences the theme.”

For this exhibition De Blauwer chose a film to respond to. Fitting to her work, it is a film that is psychologically charged. And it was made in the sixties. In a seminal essay on that film, writer Susan Sontag spends a lot of time talking about its narration. Instead of the classic, linear story, Sontag argues, the narrative construction of the film is best described in terms of the form: variations on a theme.

I recognize the images of Katrien De Blauwer in this exhibition as variations on a theme. The theme is that of a fugue. It is the theme that rose to her from the film. A fugue is a musical composition, contrapuntally developed in a continuous interweaving of repetitive or imitated elements through different voice parts. The term also describes a rare dissociative disorder, a disturbed state of consciousness in which the one affected seems to perform acts in full awareness but upon recovery cannot recollect the acts performed. In short, a state in which one seems to lose his personal identity and for a brief moment turns into someone different. As if a second, secret identity is hidden in one and the same person. In a way, a fugue state suggests that two separate identities can make up one person. Just like two separate fragments of one or two photographs can make up one image, once they’ve passed through the hands of Katrien De Blauwer.