“Never tell me, by the way, that the dead look peaceful,” George Orwell wrote, after he had just seen the lifeless body of a man trampled by an elephant.

The German photographer Rudolf Schäfer thought they looked very peaceful, the faces of the deceased. He portrayed them, with a white sheet pulled modestly to their shoulders, in soft black and white in his book Der Ewige Schlaf: Visages de morts (1995). And it’s true. Some faces even seem to have something blissful about them. However, the dead of Schäfer were not trampled by an elephant; they died a natural death. That awareness works soothingly.

It’s different with the photos of Jeffrey Silverthorne in Morgue. The American was barely twenty-five when, to his astonishment, in 1972, he was given permission by the Attorney General of Rhode Island to photograph in the state morgue. Those who ended up there had come to an end in unknown or violent circumstances. Silverthorne photographed the deceased straight-forwardly, without frills. Only with the victims of cot death is there hesitation – Silverthorne had just become a father for the second time. Here there are no faces in the picture.

One woman died at home. One man was beaten to death. Another committed suicide on the train tracks. A boy was hit by a car; another was found in the bushes. The best-known photograph is the one of a couple who died of carbon monoxide poisoning, literally separated by death, each in their own morgue ‘drawer’. The solid, stylish shoe from Silverthorne in the centre of the image not only emphasizes the separation, it also provides the scene with a contrarian dynamic, a disruptive heartbeat.

It feels wrong, looking at photographs of the dead in a forensic environment, but in a non-forensic context. Why do we do it then? And why does someone photograph them? Silverthorne gives a few explanations in the book, but in the end it comes down to that one time when, as a fourteen-year-old boy, he secretly photographed his grandmother at her funeral. Death fascinates and continues to fascinate, even when it confronts.

The French philosopher, Roland Barthes, spoke of how photography irrevocably places someone in the past; about signs of a future death. But what about pictures of those who are already dead? How do you stop the time of someone whose time has already passed? “The morgue was black and silent,” Silverthorne writes, “nothing given back.” Looking at photos of the dead, you enter a kind of vacuum. It is like staring into the void. 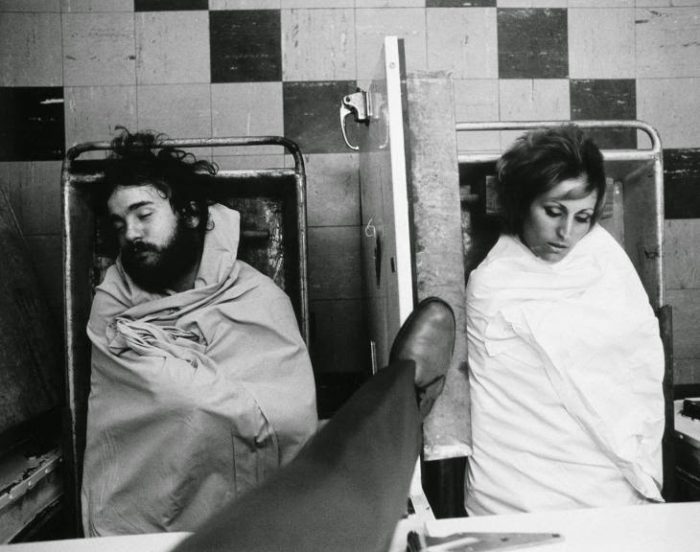 This feature on the book Morgue by Jeffrey Silverthorne was published in De Standaard on March 9, 2018. Translated with the kind help of Josephine Dixon.